Gees… I was trying to surprise my roommate /boss lady by hooking her TV into her home theater and adding Bluetooth capabilities so she could stream the mp3’s on her iPhone to the stereo receiver. Unfortunately something went wrong. I had to rearrange the power wires on the surge protector so there would be room to plug in the transformer to the Bluetooth receiver. When all the plugs were in place I went to power everything up… And the home theater receiver did nothing. I tried reseating the connections with no luck. Apparently her $200 1000watt JVC TH-C30 home theater unit is dead. Damn my luck. I told her I would replace it 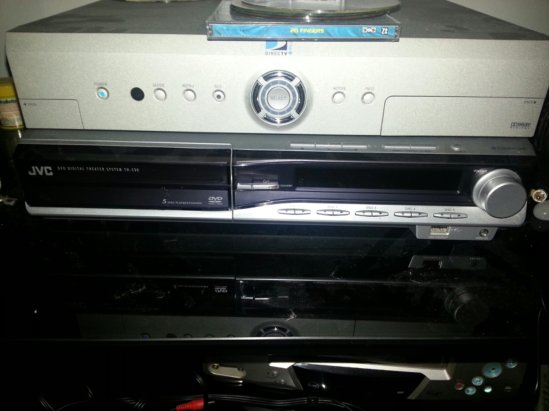 When I looked around on the Internet I was not able to find anyone that still sells that system. I ended up looking for something in the price range at Best Buy. I found a Sony system   that is actually far superior for only slightly more money. So when I can I guess that is what I will get her. All in all I guess it could have been much worse. That JVC really wasn’t that high end and a comparably priced contemporary unit will be far better and if course not very expensive at all.